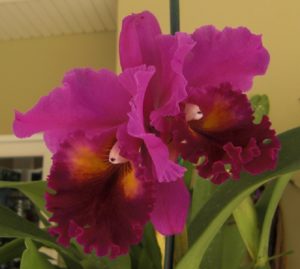 Cattleya Nigritian x Blc. (Brassolaeliocattleya) Bryce Canyon
This orchid with beautiful deep raspberry-lavender 5-inch flowers, with a couple of “yellow patches in the throat, is an unregistered cross. That means that the plant was never given a name and registered with the Royal Horticultural Society in England (the organization that keeps track of all orchid hybrids that are officially named). The Cattleya Nigritian parent is an old, old hybrid created by Sanders Nursery in England and registered by them in 1945. This plant received only one award from the American Orchid Society for the cultivar ‘King of Kings.’ The Blc. Bryce Canyon parent was created by Armacost and Royston Nursery of California and registered by them in 1973. This hybrid has received two awards from the American Orchid Society, a Highly Commendable Certificate and an Award of Merit, both for the same cultivar ‘Splendiferous.’ The flowers of both parents are very similar in appearance to that of the cross. Since the cross was never registered we don’t know who made the cross. However, that does not mean that it is not a delightful plant in its own right and one that anyone would want in their orchid collection!!