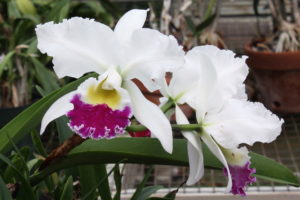 Lc. (Laeliocattleya) Nancie Thomas
Nancie Thomas is a beautiful, large, “corsage-type” orchid. The flowers are white with a purple lip, with 3-4 produced on each spike and are about five inches across. The plant blooms once a year in the late Fall to Winter. The plants are fairly large with the pseudobulbs and their single leaves reaching at least a foot or more in height. Lc. Nancie Thomas was created by Lines Orchids of Signal Mountain, Tennessee in 1969 by crossing Lc. Stephen Oliver Fouraker with Cattleya Bess Truman. Yes, one of the parents was named after that famous First Lady. Nancie Thomas has earned one award from the American Orchid Society, a Highly Commendable Certificate (HCC).